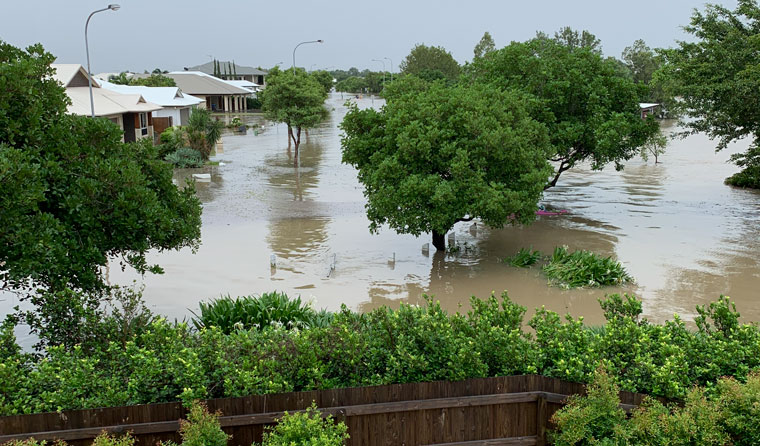 Approximately 20,000 Townsville homes are on the verge of being completely swamped if the current heavy rains in northern Queensland continue, authorities warn.

Steve Munroe, the Acting Chief Superintendent said their records show that about 500 homes in the area were prone to flooding.

This is just crazy and if the rains continue all through the weekend and next week, we could start talking of 10,000 to 20,000 homes.

“It’s those vulnerable neighbourhoods at the moment, homes built in the low-lying areas with water in their backyard”, he said.

According to the Townsville Mayor Jenny Hill, the police in conjunction with Defence Forces moved from door to door trying to rescue people in suburbs within Townsville.

“We are also urging people to actually self-evacuate and assess the current situation in their own homes,” she explained.

It’s also feared that Ross River might swell and release its waters through the river’s spill way at Ross River Dam. In the last four days of heavy rainfall in north Queensland, the Ross River Dam has hit a record 212 per cent volume—tripling the water capacity in the catchment.

Thankfully, the Cr Hill has confirmed that there was zero risk on the dam’s integrity and it has a large flood mitigation capacity that is still available.

“At the moment, all we’re trying to do is control the inflows and outflows so as to minimise the force downstream,” she added. Enhancements to increase the dam wall’s capacity were finished in 2007.

The Bureau of Meteorology (BOM) labeled this circumstance as “severe and historic” even as Townsville Airport recorded 861 millimetres of rainfall within seven days.

On the flipside, the Army was busy sandbagging the city’s south which has many homes that are submerged in water and with streets that look like canals.

Chris Brookehouse’s home situated at Rosslea was flooded with more than one metre of water. He confirmed he was staying at the house but would leave if flood levels rise any further.

“If the levels get any higher, we’ll go — I’m yet to see anything like this,” he said.

Another Townsville resident Ashleigh was on her way to the gym when he noted several people displaced by the rains and welcomed them into her home.

“I thought I’d go to a workout and then saw some guys on the side of the road — you can’t just fail to help them,” she said.

According to a statement by Bruce Gunn the Queensland’s BOM manager, the monsoonal low trough would be experienced over the northern Queensland for about 48 hours.

He added that, “the risk involved was high for the next few days. People should expect heavy rainfall that is likely to last for several weeks.

“We’re expecting rains in the range of 150 to 200 millimetres and a few isolated areas may receive up to 300 millimetres within a six-hour period. That means some parts of the coastal area should also expect falls running into several hundred millimetres per day.

“The monsoonal low is currently lying between Mount Isa and the Gulf of Carpentaria Coast, extending the trough through the Cape York Peninsula as it drives that moist onshore flow onto the Coral Sea coast.”

Anxiety around Mt. Margaret and the Upper Black River

Predictions by BOM’s forecaster, Adam Blazak reveal that south west of Townsville received heavy rains and this could worsen the flooding.

“We have serious concerns at the moment for Mount Margaret and the Upper Black River, owing to the heavy rains seen here in the past few days,” he said.

“We expect flash floods around the river area and hence the downstream needs to really take care.”

Last Friday, Mt. Margaret was pounded by 363mm of rainfall and seven-day rains of 1,186mm as the neighbouring Black River recorded a total of 1,272mm within a period of seven days. This means for residents must have a good plan and carefully listen or follow emergency alerts.

Reports from the Townsville City Council reveal that these areas are likely to see heavy rainfall that might cause fast-moving and rising water levels leading to flash flooding. Residents in the mentioned areas have been encouraged to move to higher grounds to avoid being swept away.

In a statement, the Palm Island Aboriginal Shire Council advised island residents to boil their drinking water since the rains had really affected the water treatment plant.

The search and rescue operations coordinated by the police included air search with the rescue helicopter making contact with the affected group that luckily had enough provision and were uninjured.

With the impending wet weather warning, residents in Torres Strait are set for the floods and the tidal inundation expected in various parts of the Gulf Country and across west Cape York Peninsula.

Pedro Stephen, the Torres Strait Regional Authority chairman noted that several homes were already inundated following a wet weekend and hence the authority was preparing to evacuate some more to safer grounds.

According to Mr Stephen, the high tides will mark the first real test for the advanced geo-tech sandbags that were installed along Poruma Island in order to safeguard the community of about 200 people.

Rescue crews from Swiftwater are on the Cassowary Coast to help the community to prepare for flash flooding.

The Bureau of Meteorology has asked residents in Tully, Cardwell and Innisfail to expect rains of up to 200 millimetres as the continuing monsoonal trough is expected to cause extensive flooding in Cairns and various parts in south of the city.